As human beings, we do not only live in an era of change but most notably also in a change of era. We find ourselves at the beginning of a 2160-year period that is known as the age of

Aquarius or the Aquarius era. Consolidated structures are eroding, as new cosmic forces drive mankind towards consciousness and renewal. It concerns a development that is entirely in keeping with the divine plan. This development, this changing from a material to an etheric predominance, finds its purpose in building regeneration out of degeneration.

The profoundly changing circumstances force us to become aware of our soul and to start being inspired by it. How can we do this? We do not have a cut and dry answer to this question. We might search for inspiration in the classical holy texts of several traditions and in the writings of spiritual torchbearers. They may be able to alter our vision on the relationship between God, cosmos and man to ignite our soul flame and to illuminate the spiritual path for us.

Every person is ensouled, but it is so hard to explain what the soul is. The soul is invisible and immeasurable. Scientists of the past have tried to prove the existence of the soul by weighing a human body before and after its passing away. The average of 21 gram difference in weight that was discovered still has not made the soul any more tangible.

Originally, man was a spirit-soul being. The original soul mediates like an instrument to connect body and spirit. The soul, this mediator between body and spirit, can be restored. The essence of this ether form resides in the top right heart chamber and is a spirit-spark, a divine atom. It is the primordial atom that will be the source of the birth of new mankind.

This primordial atom is a miracle in itself. It is a sevenfold atom of radiant beauty. When the birth of the inner Christ is unfolding in someone, the start of recreation in that person is enabled. In a sense, the gnostic fire causes an explosion of this sevenfold atom. In that process, one of the seven principles remains behind in the heart. A second principle forms the light-vesture in the shape of a pentagram. The other five principles lie within this light-vesture and correspond with the head, the hands and the feet.

Approximately five hundred years ago a renewing development called the Reformation was heralded in Europe. Then, Martin Luther attached a placard with 95 theorems on the door of the Castle Church in Wittenberg in order to address the deplorable state of affairs of the Church at that time. The Reformation has considerably contributed to the development of mankind but it was accompanied by much strife and rivalry. This caused an enor- mous fragmentation and crystallisation in the Christian world.

Roughly a hundred years after the start of the Reformation in 1517, a lot of people realised it had not amounted to what had been hoped for by many. Dogmatism and religious dissensions were paramount.

This explains the urgently necessary impulse of the Rosycross, expressed particularly by Tobias Hess and Johann Valentin Andreae at the beginning of the seventeenth century in southern Germany, by Jacob Boehme in eastern Germany, by John Dee and Francis Bacon in England and by Jan Amos Comenius in the Czech Republic. Together with many others, they made an effort to come to universal world reformation based on the timeless mystery wisdom, science, religion and arts. They labored for the future by sowing seeds and it is only now that we are able to harvest the fruit of this labour on a large scale.

As mankind, we stand on the threshold of a complete world reformation based on universal spiritual principles that are increasingly recognised and understood by many. The internet has a key role in this process. Already in 1641, Comenius foresaw something that we now know as the world wide web. He referred to it as every- one-everything-everywhere.

This book, ‘‘Mysteries and Symbols of the Soul - becoming a spirit-inspired person’, has been created in the International School of the Golden Rosycross and was published in Dutch in 2016. It is part of the book series of Spiritual Texts Academy. The editions are intended to be a helping hand to 21st-century people who are looking to make the journey on a path of spiritual consciousness and renewal in daily life. The editions are based on carefully selected classical spiritual texts and insightful reflections on these texts. They draw on the more than four-century old living tradition of the Rosicrucians. Every book by the Spiritual Texts Academy is spiritually inspired, widely oriented and deeply rooted.

In ‘Mysteries and Symbols of the Soul’, the soul and the path of soul-spirit development are discussed based on observations about the nine holy texts originating from several traditions, Advaita Vedanta, Hermetism, Kabbalah, Gnostic Christianity, Raja Yoga, Judaism, Buddhism, Zoroastrianism and Pauline Christianity. This book is the first volume of a trilogy of gnostic mysteries intended for modern people. You will be able to recognise these three books by a sun on their covers, each one in a different colour.

The mysteries have an inherent universal character and therefore do not exclusively target specific religions, philosophies or spiritual movements. Universal wisdom is expressed by many and various religions but unfortunately, it often has been watered down, subject to crystallisation and degeneration, causing the spirit to recede from it.

In 2017 and 2018, the second and the third volumes of the said trilogy was published in Dutch. In the next few years, we intend to publish these books in English, entitled ‘Mysteries and Challenges of birth, life and death – becoming a new man’ and ‘Mysteries and Hymns of God, cosmos, man - realising the divine plan’.

The last chapter, entitled ‘The soul as a world worker’ centres on the great importance of cooperation in the spiritual field. Ideally, this book would be used in a contemplative circle, for a group of like-minded people discussing and vivifying its contents would allow for a deeper understanding and realisation in their personal lives. After all, the purpose is to become a spirit-inspired person who will cooperate to heal the world and mankind and who will contribute in the realisation of the divine plan.

Source: Mysteries and symbols of the soul - becoming a spirit-inspired person by André de Boer 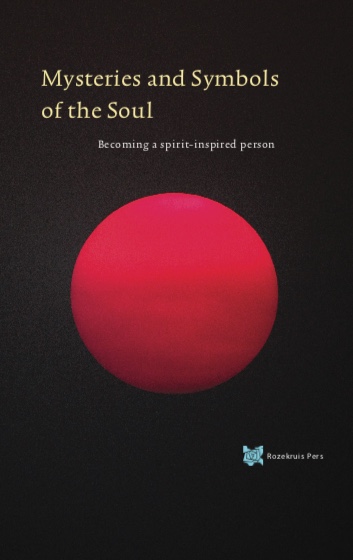